The purpose of a Reverse Design isn’t merely to accumulate data, especially since there is a ton of data on videogames these days. The greater purpose of a Reverse Design is to figure out what those data mean so that readers can learn from the masters. Thus, the second step in the writing in the book was to look for patterns in the data. One of them is obvious: across the course of the game, the various jumps get harder. Donut Plains 3 and Chocolate Island 3 are almost the same level, except that the latter level has a larger average d-distance, significantly more enemies, and far fewer safe platforms. 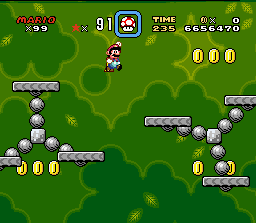 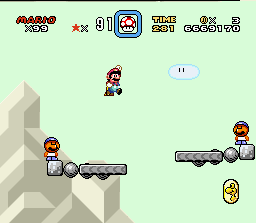 This is something everyone knows: the game gets harder. One thing that surprised me, however, is that most levels did not get harder this way. There was no consistent quantitative measure that showed why later levels would be more difficult than earlier levels. Generally, the data suggest that every numerical factor in the game (distance between jumps, number of enemies, size of platforms) either peaks or plateaus before the halfway point of the game. Interestingly, though, there is very consistent evidence that individual levels become more complex toward their respective ends, and so this is where most of the research was done. In almost any level in the game, the relation between the end of the level and the beginning is fairly obvious. 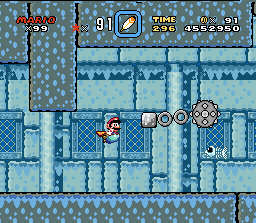 For example, these are the first and last encounters possible with the Ball’n’Chain enemy in Vanilla Fortress. It’s pretty obvious that the second instance is a lot more difficult than the first, for both quantitative (amount of safe space, number of intercepts) and qualitative (variety of dangerous objects) reasons. This is true of almost every level in the game. Therefore, it stands to reason that the structure of levels might have something to tell us about how the game gets harder.

To understand how levels grow more complex, we have to break them down into their constituent parts. A challenge is the essential unit of content in a level. It is a cluster of actions that must be undertaken in one attempt, with periods of relative safety on either side of it. The safe spaces between challenges are the best way to figure out when a challenge begins and ends. For example, the first and third shots here are the beginning and end of this challenge from Yoshi’s Island 3. 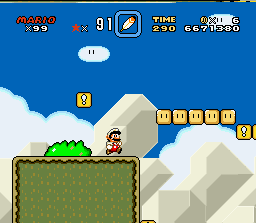 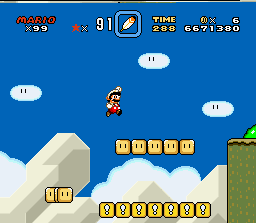 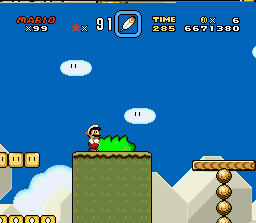 The challenge begins and ends in safety. Most challenges are like this; it seems that the design team wanted players to be able to plan ahead a little bit when going through any challenge. 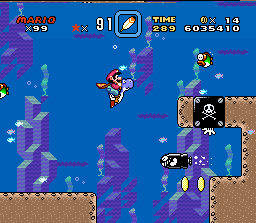 The standard challenge contains a torpedo launcher with some accompanying Blurps. We’ll see how this grows in complexity as the level progresses.

Expansion Challenge – An expansion takes an existing challenge and increases some part of it quantitatively. An expansion challenge doesn’t change from the standard challenge qualitatively (or at least not by much). In Soda Lake, this is the first expansion: 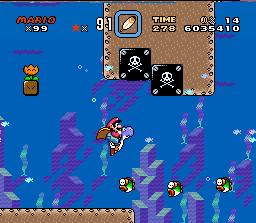 The number of launchers goes up, but there’s still the same amount of swimming space and the level architecture hasn’t increased in complexity. Although the position of the launchers has changed, it hasn’t evolved—it’s still on the edge of the screen rather than bisecting it or covering all of it in launchers. There are many other ways to create an expansion challenge. These variables are common, too:

Evolution Challenge – In contrast to an expansion, an evolution is a qualitative change that uses all the same skills as some previous challenge but in a more qualitatively complex situation. In Soda Lake, the first evolution is this one. 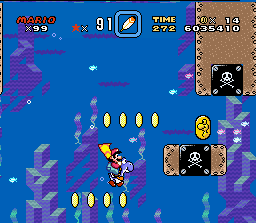 Here, the two launchers from the previous expansion are split up to cover more of the screen. The quantitative elements are mostly the same: there are still two launchers. The configuration of the launchers makes for an undeniably more complex challenge, however. Now, rather than having one clear path to take, the player has to assess the two possible paths and choose the more likely. This is one form of the greater complexity that an evolution challenge accomplishes.