Hey, listen! I have an RSS feed now. Subscribe!

In a moment of supreme delirium and/or clarity it occurred to me that free-to-play games, or at least the ones I play, are like dating. Also, last week's post was a Sahara-dry doorstopper, and I'd like to make it up to everyone.

Now, I did not date much--although a few girls were unlucky enough--and pretty much married the first woman who didn't file a restraining order against me. Shocker, I know. Usually guys who write about videogames on the internet for $0 are total ladykillers. In any case, because of my relative inexperience, everything I say should be taken with a grain of salt. Or an entire shaker of salt, because that will cause you to vomit, getting all the toxin out of your system. James Bond did it in Casino Royale, so it must work.

Okay, now I'm going to pitch you my analogy. With free-to-play games you don't have to commit. You spend a little money, you have fun for a night. If you really like it, you can come back and do it again sometime. You can introduce your new F2P girlfriend to your bros, maybe get them to "date" an F2P as well because it's the 2010's, and human/inanimate object romances are an established part of society in at least one first-world country.

Also, before a feminist critique of this post becomes more famous than the actual post, I should say that everything below works backwards, if you're a liberated woman. Simply copy the entire piece in to Word, do a find + replace of all the gendered pronouns, and you can resume making fun of this article strictly because I'm an idiot.

Now, a catalogue of the lovely "ladies" of the F2P genre.

She's cute. There's no denying that. You wouldn't be the first person to be taken with her pastel outfits and innocent charm. And she's got a couple of different looks, too: country girl, city lady. She's also really approachable. Nobody ever has trouble introducing himself to her. In fact, if she knows your friends, she's about as likely to ask you out as the reverse.

But she's kind of high maintenance. She calls you all the time. Even her friends are all over you. You can't even log on to Facebook without getting a million messages. And she's got this weird, passive agressive streak. "Congratulations on your big day at work! You got a promotion (to level 13)! Why don't we look at this catalogue of expensive stuff? Right now."

In fact all she ever seems to talk about is shopping. Some girls are like that, but she does it at such weird times. You're broke, so she wants you to buy stuff? You're out of energy, so she wants you to buy stuff? Her friend sent you a gift, and she thinks you should buy the rest of the set? Oh well. Maybe she's not for you, but she probably won't even be upset. She's had like 120 million boyfriends or something. She'll go and get a new outfit... Spaceville or Islandville or something, and you'll be curious again.

Ah, you remember her when she was just a fledgling Warcraft 3 map. You had an on-again-off-again thing going for a while. You'd be off doing whatever for a month, and you'd come back and she'd have a totally different look. She'd be hanging out with a different crowd. There was always something new going on with her. Now she's all grown up and she's made it to the bigtime. 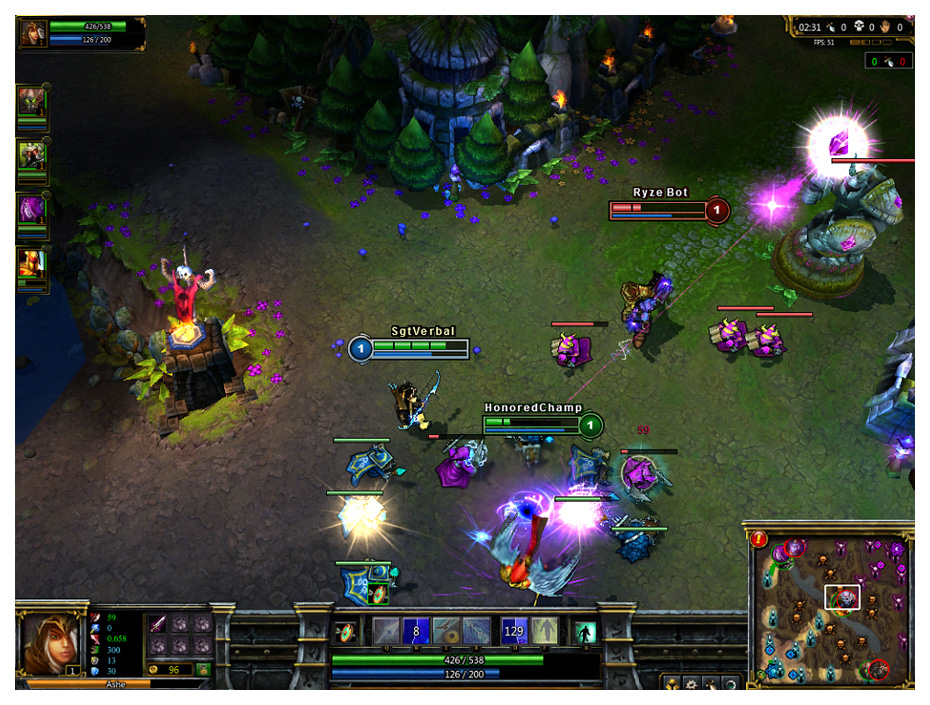 There are a lot of things that are still the same. She still introduces you to all these cool people: Ashe, Dr. Mondo, Sivir, Twitch. They're pretty cool. There's always someone new coming by too. Some of them are weirdos, but some of them are decent champions--err people.

She's still a ton of fun to play with. And it's nice too that when you do something you're not just spending money on her, you're spending money on "us." Sure, you bought a few useless decorations. There was that one time you had to buy her Bro(laf) a plane ticket, and it was way too expensive. He was kinda funny at least. The only real problem is when you're out with her, all these other guys give you a hard time. It's always "noob this" and "nub that" and "if I were as bad as you I'd kill myself." Whatever. They're just jealous. Besides, you can always just hang out with her and the bots at home. She can play it low-key like that.

You remember her, right? She used to be in that open relationship. She was serious with someone, but she had a lot of non-subscribing retail purchasers on the side? You heard stories of how her subscriber would walk in on her and her little boyfriends. They'd be comfy on the couch, customizing their broad array of randomized FPS weapons, and he'd walk right through the living room, give the other guy the stink-eye. Then he'd vanish off into some premium content or something. You know you weren't supposed to be jealous, but what was he getting that you weren't? It was all kind of awkward.

Well, apparently her relationship with Mr. Subscriber is on the rocks, and she's gone free-to-play. She's not as graphically cutting-edge as she used to be, but hey. It's not just any girl that can offer you two minion-master classes.

She reminds you of that first girl you really had a crush on. No, not the girl in Mrs. Cooper's math class. The other one, the one who set your heart a-dreaming. You remember, don't you? Hiromichi Tanaka's daughter, Secret of Mana. The resemblance is unmistakable: the bright color palette, the cartoonish sprites, the flashy and colorful spell effects. There's that shiny, pop-ish music with its chromatic harmonies. There's that hack-and-slash action. Oh, and she's got that hold-attack-to-power up thing that made your boyish innards tingle.

But what are you really seeing in her? She's not the girl you knew when you were young. Her combat system only has three real weapons, and the power-up is meager and not very useful. And she always wants to do the same damn thing. The first time you went to one of her randomly generated levels it was a party. Maybe even the second time. Eventually, though, you began to see how it was all the same thing, over and over and over. Stand on a button, fight a few waves of enemies. Collect a bunch of crap you don't need.

And that alchemy set she showed you? "Fun!" you thought. "She likes to do arts and crafts." But there's no depth there; it's little more than a vending machine. You can't really customize anything, it's all just paint-by-number or a slot machine. You can't really cast spells. It's just more hack, hack, lunge. Maybe all along it was just nostalgia blinding you to the present.

She was the Jan Brady of MMOs. Everyone was always talking about her big sister, World of Warcraft. Even when she would wear something daring and new, Marsha would just buy a more expensive, more elaborate version. She did manage to find herself about a hundred thousand nice, reliable Mr. Subscribers, but that just wasn't doing it for her. So now she's back on the market, doing her crazy divorcee/mid life crisis deal, calling herself "Age of Conan: Unrated" now. You think you're man enough to handle her?

Realm of the Mad God

The new girl. She's got a quirky style, some old-school swag. Lots of energy too. You don't have to download her someplace fancy, either. She'd be glad to meet you in any old browser. She's definitely a knockaround kind of girl. Grab your friends and you can all go out shooting eight-bit monsters--right now, why not? She wasn't doing anything too important.

She's kind of a tomboy though. If you were looking to go somewhere private and do some crafting or maybe find some narrative segments, she's probably just gonna punch you in the arm and call you "bitch," for the rest of the evening. Some of the trappings of nice graphics, or music that isn't mind-numbingly repetitive, or tactical decisions in combat--yeah those aren't really happening. If you're just up for shooting stuff all night with a bunch of the guys, then maybe she won't offer to "braid your girly hair" while you "relax in a jasmine bath surrounded by scented candles" since you're a "giant nancy boy."

Still though, it's nice to have someone who's always up for grabbing a drink. Especially if that drink gives you a permanent +2 to your agility stat. Now stop talking and turn up ESPN.

Not a whole lot to conclude about this topic except that it's a lot less dry than the previous monster of a paper I wrote on this site. Also, I'm extremely cynical of free-to-play games. Then again I was cynical of the Red Sox in 2004, and I ended up being pleasantly surprised in the end.