The Short VersionThis section uses a statistic called RDur to measure the average length of encounters in dungeons throughout the game. The results of this study reveals that generally, most dungeons are very close in terms of encounter duration, from the beginning to the end. If this is true, it follows that the increasing difficulty necessary for making the game fun must come from another design feature. This feature is identified as being the "long game," which is the practice of making an entire dungeon into the meaningful unit of content, rather than the individual encounter. The final dungeon of FF6 is examined to illustrate how this happens, through the use of various battle-level attrition designs.

HP, defense, evasion, and all the complex equations that make them function boil down to one essential thing, a stat which I call real durability (RDur). RDur is a measure of how many attacks of a certain type character or enemy can withstand before becoming incapacitated. Ultimately, FF6's battles--like most RPG battles--are about who falls down first. The enemy can endure X number of hits, the player characters can endure Y. These variables are the respective RDur stats of each side of the battle. Obviously the RDur for each character, enemy and attack is different, and there are modifiers like healing (which I do take into account, below), but this is a pretty simple way to look at how difficult any given dungeon is, relative to other dungeons. Because RDur scales perfectly with level, it makes the designed difficulty of various challenges understandable as a part of a greater whole.

RDur is made easy, both for us as analysts and for the designers who made the game, by the standardization of stats in FF6. The standardization of stats is a simple practice, common to many RPGs that allows the designers to adjust difficulty on fewer axes. You can visualize it here. It forms a bell curve, albeit an ugly one because there are too few categories for the line to be smooth. 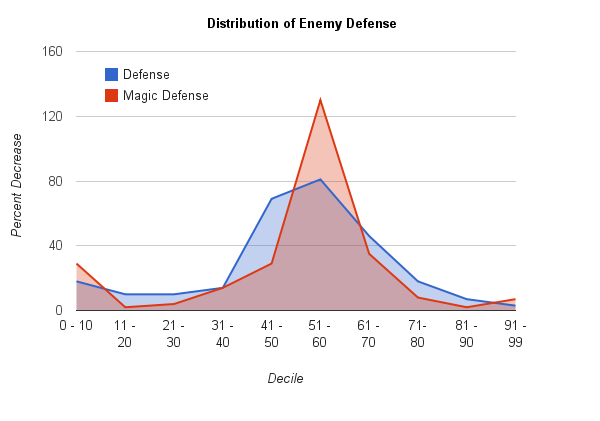 The average enemy defense stat is about 112, or a 43% reduction from raw damage. More than a third of the enemies in the game have a defense stat within 5% of this reduction. And, as you can see the same is true for magic defense, although the most common reduction for magic is in the high end of the 50 percent range.

There are numerous possible explanations for why magic defense is higher, on average, than its physical counterpart. Foremost among them is that the formula for determining spell damage is more favorable to the player than its physical counterpart. It's a lot easier to puff up a character's magic attack than his or her physical attack, as we saw on the last page. Magic defenses rise to prevent exclusive reliance on magic, powerful as it can be. The second reason magic defense is higher, I think, is to offer a strange solution to the even stranger manifestation of the Sorceress Problem that appears in FF6. (But more on that below.) Magical RDur and Physical RDur correspond closely, except in two deliberate cases. The Magitek Factory sees a rise in physical RDur that is significant for that moment in the game, but a corresponding drop in magical RDur. It makes sense from a gameplay angle: the player has just received their first Espers and magic, and the game is teaching them how to ration their MP in a longer dungeon. The other example is the Ancient Castle, in which magic is almost completely unusable. This makes some amount of sense from a plot perspective: the place has been sealed since the War of the Magi, and so everything within is well defended from magic. It's actually downplayed on the graph, the actual RDur is much higher (around 50). Short version: don't use magic there.

Want to read more? The rest of this section can be found in the print and eBook versions. In fact, the print version of this book has been significantly expanded and revised.

Next: A Final Look at FF6