If you're interested in more research like this, most of it is going to be in video format over on the Forum's YouTube Channel. You can also support future work through the new Patreon campaign.

Also, you can now get the entire Reverse Design Series in print! The print editions are the definitive versions of the books. They are revised, profesionally edited, beautifully laid out, and expanded with new content.

This is the third entry in the Reverse Design series. The goal of this series has been to reverse-engineer all of the design decisions that went into classic videogames. Of the other books in this series, the best companion for this one is the book on Half-Life, as it shares many design structures with Super Mario World. The other books are all on RPGs and work much differently than this one does. The books on Final Fantasy VI, Diablo II, and Final Fantasy VII are much more focused on game systems rather than level content. Because of that, it’s possible to sit down and read those books, in order, in a few sittings. This book is longer than those books, and probably cannot be read straight through. Rather, the best way to approach this book is to read the first three chapters as one block, and then read the rest as you play each level of the game.

One of the driving motivations behind this series was the notion that we might learn more about videogame design by studying an individual game than by studying “videogames” in general. During the writing of this book, I saw an article about level design on a popular games industry website. Its major points included tips like “level design should be efficient” and “good level design is driven by your game’s mechanics,” with general explanations of what those points mean. Both points are great, but they’re not especially helpful to anyone who hasn’t already been designing levels for a long time. Although that article offers high-level principles about level design, it doesn’t answer questions like “what do I put in level two?” or “how do I keep level three from being too much like level five while still keeping them similar?” Nor does it answer any of the dozens (or even hundreds) specific little problems that a designer will encounter while building a game. This book aims to explain how Nintendo answered the big questions and the little questions in Super Mario World. In doing so, it finds a method that can be applied to almost any kind of videogame.

When I looked at the way that levels are constructed in Super Mario World, I found a pattern. Following that pattern not only makes it possible to fill levels with content more easily, but it also makes it easier to make a game that is coherent, fair and fun. This pattern exhibits three levels of ascending complexity: the challenge, the cadence, and the skill theme. Those things are defined later in this book, because in order to understand them, one must first understand Super Mario World’s place in game design history. The challenge, cadence, and skill theme would not be possible were it not for the development of composite games. We’re going to look at all of those ideas briefly in this introduction, and then in much greater depth in the sections that follow.

It’s probably worth giving you a look at what the all of those things are, however, so that you can determine whether or not this book will be useful to you. The level design of Donut Plains 3 illustrates the key concepts of Super Mario World’s level design well. Below are several screenshots of various challenges in the level. Be warned: there’s a lot of jargon coming, but you don’t need to understand it yet. The example below is just meant to show where this book is going. 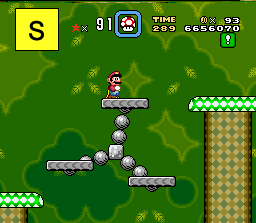 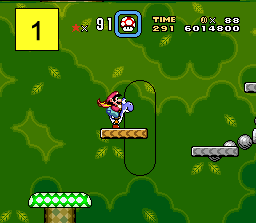 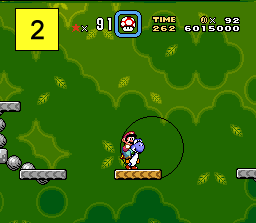 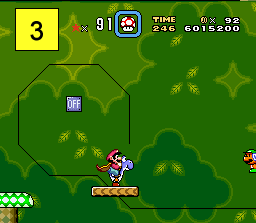 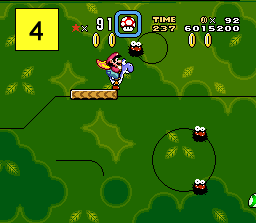 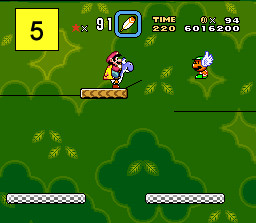 In order, these are screenshots of the standard challenge, an evolution of the standard challenge, an expansion of that evolution, an evolution of the first evolution, a divergent evolution, and an evolution/expansion that combines elements of two challenges. That’s not all of the challenges in the level, but that’s the important line of development. Essentially, this is a two-part “fork cadence” level that divides into two sections. One of those sections is based on platforms that move in loops, and the other is based on platforms that move along lines. We can extract the important data from this level by charting it in two different ways.

These diagrams are two different forms of what I call a cadence analysis. The last thing to know about the level is that it belongs to the “moving targets” skill theme. I know that was a lot of jargon, but don’t worry if you didn’t understand it all..

The first step to understanding everything that was going on in the previous paragraph is to begin at the beginning in 1981. That was the year that Shigeru Miyamoto, the creator of Mario, began his career as a game designer. Over the next few years, Miyamoto and his team created not just a game franchise, but an entirely new method for designing videogames. The Mario series represents the bridge from the original arcade style of videogame design to the new “composite” style of videogames that he invented. Composite games became the dominant school of game design from 1985 until about 1998. Chapter one of this document will comprehensively define what composite games are. The short version is this: composite games combine two or more genres in a specific way to achieve (and maintain) a form of psychological flow. Haphazardly mashing two genres together doesn’t work, but Miyamoto and his team figured out numerous techniques that allow different genres to play together in compelling ways. Game designers at different studios all around the world saw Nintendo's breakthrough and started using composite design techniques immediately, and with great success. A huge variety of games—everything from Mega-Man to Portal, from Doom to Katamari Damacy—are composite games. Early Mario games were always on the cutting edge: virtually every Mario title between 1985 and 1996 saw a significant advance in the practice of composite design. Super Mario World is no exception, and throughout this document there are frequent references to how the gameplay uses composite design techniques to keep the player entertained.

There is one last proviso that needs to be said here. Although I have found numerous patterns in Super Mario World and the history of videogame design as a whole, it is not my opinion that designers intentionally planned all of these things. In fact, Shigeru Miyamoto himself has admitted that for all of his best games, he and his design team tried a huge number of different design ideas, and simply kept the ideas that worked the best. Therefore, my opinion is that composite game design is merely a natural evolutionary step in the development of videogames. Composite design techniques worked well, and so designers kept using them, even if they didn’t fully understand why they worked. It’s likely that game designers have gradually become more conscious of the nature of composite design and composite flow, but proving this point would take a much larger study than the one being attempted here. It is enough to say that Super Mario World is a great example of the Mario developers taking their design techniques to the next level. This book explains how they did it.