Our first step in studying Super Mario World is to understand the game’s historical context. The Mario series, though it seems safe and conservative now, began a revolutionary trend in videogame design. Before 1985, videogames were generally designed according to one central principle, what I call Nishikado motion. Nishikado motion describes the way that difficulty in a mainstream videogame rises and falls in a regular fashion. The phenomenon is named for Tomohiro Nishikado, who discovered it (serendipitously) in his masterwork, Space Invaders (1978). In that game, the enemy aliens start the level by moving slowly, and then get progressively faster before resetting with a slight uptick in difficulty when the next level begins. 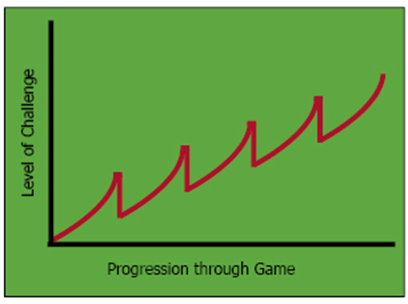 The graph above visualizes Nishikado motion as it occurs in Space Invaders and thousands of other games. This kind of ebb and flow in game difficulty is still, to this day, the central principle of videogame design. That said, videogames have evolved a lot since then. In the arcade era, designers achieved Nishikado motion through control over one or two variables. For example, Space Invaders gets harder when the enemies get faster. In Asteroids (1979), the game gets more difficult when there are more asteroids on screen, and those asteroids move faster. Most arcade games operated similarly.

Aside from Nishikado motion, the only other major development in the arcade era was the invention of the powerup. At first, powerups were little more than a way to push the difficulty of a game up or down. For example, the famous two-ships powerup in Galaga (1981) doubles the player’s firepower, and results in a concomitant decrease in difficulty. In Pac-Man (1980), the benefits conveyed by the “energizer” powerup make the game easier for a few moments, but the length of the powerup’s effect gradually decays across the course of the game. These powerups were fun, but they were really just back doors into control of the difficulty.

The first powerup to radically change videogame design was the invention of a young Shigeru Miyamoto. Donkey Kong (1981), in which Mario first appears (as “Jump Man”), opened a different evolutionary path for powerups. The hammer powerup in Donkey Kong doesn’t simply enhance Jump Man’s abilities quantitatively, it changes their nature qualitatively. When he obtains the hammer, Jump Man loses his jumping and climbing abilities and gains the ability to attack enemies with a weapon. Essentially, the game temporarily stops being a platformer and starts being an action game. The game does not abandon Nishikado motion; rather, it adds to it. We can visualize it like so: 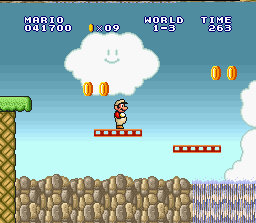 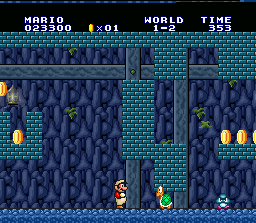 The y-axis still represents a quantitative measure of difficulty; I call it the axis of obstacles. Donkey Kong added a new axis, one that represents the qualitative changes of a game moving between two genres. I call this the axis of abilities. The back-and-forth movement between genres, unified with Nishikado motion, created a new phenomenon and led to the invention (and eventual dominance) of composite games. 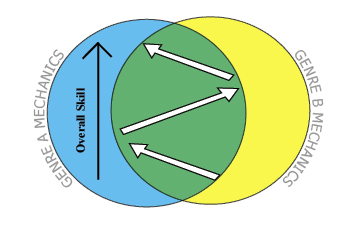 A composite game is one in which a player can use the mechanics and abilities of one genre to solve the problems of another genre, making it a composite of two videogame genres. The first game to exhibit all the features of a modern composite game was Super Mario Bros. in 1985, which is both a platformer and an action game. In the case of Super Mario Bros., the player uses platforming game mechanics (jumping) to solve action game problems (defeating enemies). The act of jumping on the head of a Goomba to defeat it typifies the intersection of genres that makes Super Mario Bros. so great. The hallmark of composite design is not just a mash-up of genres stretched across the course of a game, but rather the particular way in which the genres are combined. In a composite game, the game’s challenges bounce back and forth between the two genres. In Super Mario Bros., this means that the game tends to alternate between platform-intensive levels with lots of open jumps and action-intensive levels that feature more enemies and more combat. The game never stops being both a platformer and an action game, but it tends to alternate its focus between those two genres so that players never get bored of just one kind of activity. This back-and-forth motion between genres leads to a high and sustainable level of engagement that I call composite flow. This kind of flow is not the same as traditional psychological flow, but its consciousness-consuming effects are analogous.

In the early days of the composite game (1985 to about 1993), level design was generally defined by powerups that emphasized one genre or another, and Super Mario World is a good example of this trend. Super Mario Bros. had only one frequently-used powerup that worked as a genre-shifter—the fire-flower—but it’s remarkable how often that powerup appears in levels where there are lots of enemies to defeat and not a lot of space to defeat them. In essence, the fire-flower reinforces the level’s emphasis on action and combat. This design trend was true for most classic games of the era, in fact. Think of how Metroid or Mega-Man titles featured powerups that defined the levels in which they appeared, and you can see how designers let powerups guide their design. Super Mario World is one of the most essential examples of this kind of level design philosophy in action, as it uses two powerups (the feather and cape) to emphasize one side of the genre composite over another in any given level.

Powerup Declensions and the Evolution of Mario Games

When we talk about a level or section of a level in a composite game that emphasizes one genre more than the other, we’re talking about that level’s declension. (I.e., that level or section declines or “leans” toward one genre, but never abandons either genre.) Typically, the declension of each successive level is different, especially early in a Mario game. If the previous level was a platforming-intensive level, it’s likely the current level is going to emphasize action, and vice versa. This is not to say that the Mario team never explored how the level designs themselves could express a genre declension because they frequently did, and we’ll see that later in this book.

For the most part, however, Mario games before 1995 shaped their levels around powerups. Super Mario Bros. 3 is most interesting for the way it uses a huge variety of powerups to achieve the back-and-forth motion of composite flow. Between the fire-flower, raccoon/tanuki tail, wings, Tanuki suit, frog suit, hammer suit, super star, and Kuribo’s shoe, the designers were able to push powerup-driven composite design to its logical limit. We can think of Super Mario Bros. 3 as being the game in which the Mario creators experimented freely with powerups. That experimental attitude resulted in some truly weird and beautiful levels that people still admire today. That weirdness also had some drawbacks in terms of approachability, though. Some levels were much more difficult or more confusing than others. 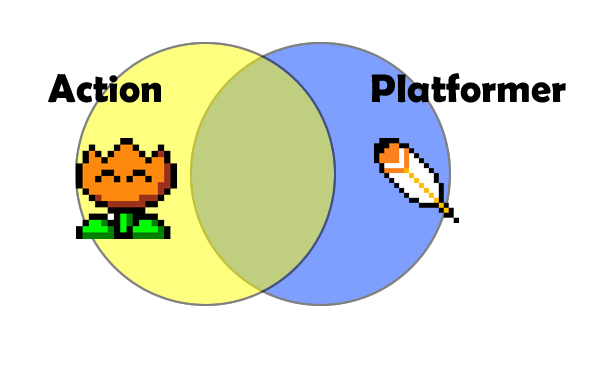 Page 3: Measurements and Their Meanings